Just a few short years ago the “The Cloud” was one of the biggest emerging trends (and buzzwords) in the tech sector. The buzz and hoopla has since worn off and given way to new shiny objects like the Internet of Things or the latest mobile development platforms.

As part of our ongoing pursuit to garner greater insights into how the developers within our own audience are interacting with different technologies and trends, we recently surveyed over 400 CodeProject members on a range of topics related to cloud computing and cloud services. Here are some of the highlights from our research.

80 percent of developers have some role in choosing cloud services

While it’s certainly important to give due consideration to potential customers in all stages of the buyer’s journey, ultimately what every marketer is after is hot leads that have decision making power and will convert to sales.

If you’re in the business of selling cloud services to software developers then the good news for you is that there is a very wide potential audience for you to target.

Only 20 percent of developers have no say as to whether or not they use cloud services, according to the responses collected in our June/July 2015 survey of over 400 developers and CodeProject members on the topic of cloud services. 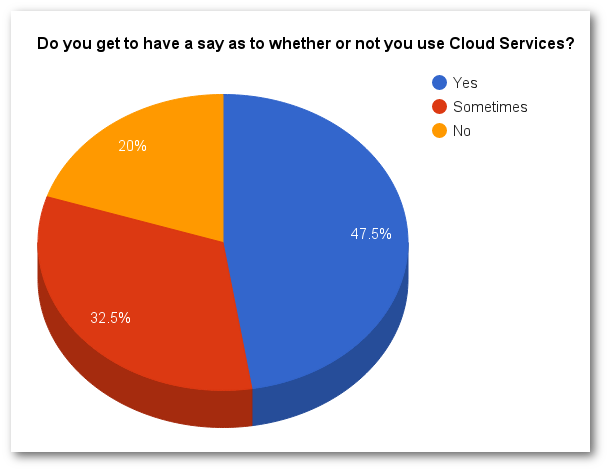 The other 80 percent play some role in choosing cloud services for their organization and are ripe marks for you to target with your marketing dollars.

Which types of cloud services are developers using?

Web hosting and storage are by far the most widely used types of cloud services among the developers we surveyed. These cloud services are used by 47.5 percent and 44 percent of devs respectively.

Database and NoSQL technologies are another popular cloud service and are currently being used by just under 27 percent of the developers that responded to our survey. 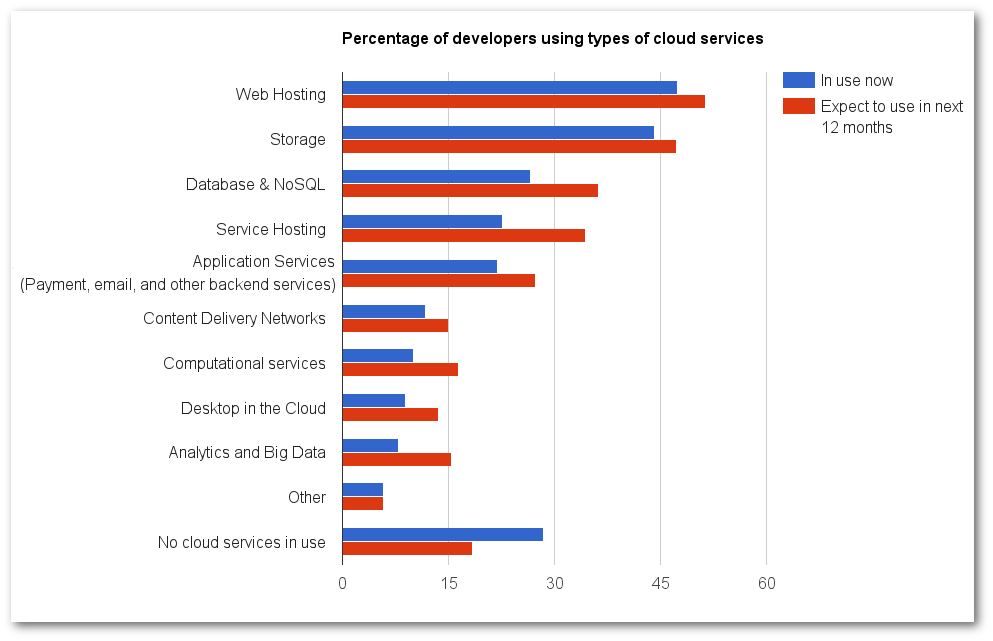 Just under a third (about 28.5 percent) of the developers we surveyed said they currently use no cloud services, but in the next year that number is expected to drop ten points to 18.5 percent as more developers move to embrace the cloud.

And while some segments will see more growth than others, adoption rates for all the cloud service types presented in our survey are expected to rise over the next 12 months. In particular, Analytics and Big Data is poised to receive the most relative growth over the next year compared to any other cloud service type. It is expected to jump from its current adoption rate of just 8 percent of the developers we surveyed to approximately 15.5 percent in the next 12 months.

Who are the most popular cloud service providers among developers in our audience?

As part of our research we asked developers which cloud service providers they have used or considered using. Not surprisingly, offerings from tech giants like Microsoft, Google and Amazon all placed high on the list. 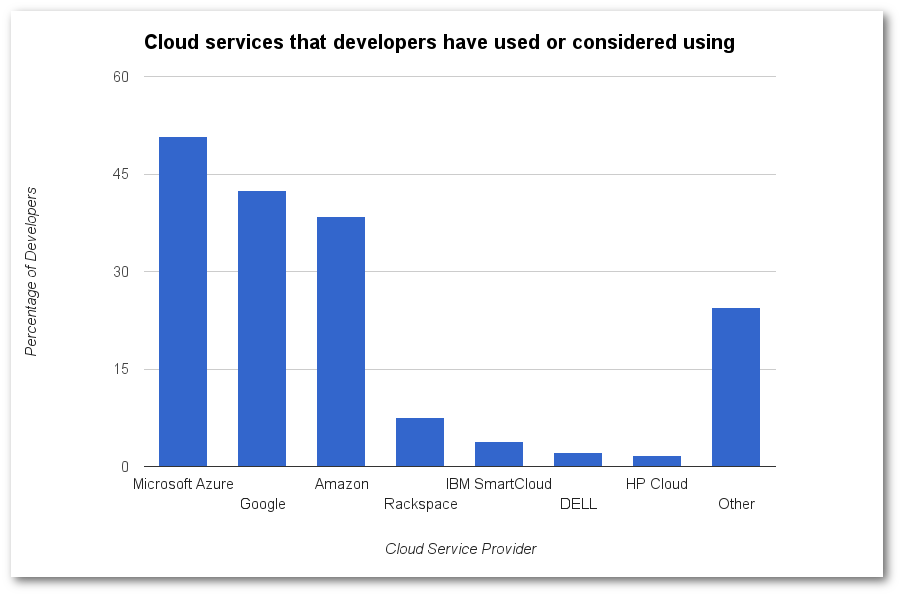 So you’re heading up marketing operations for a cloud service. You’ve been charged with increasing market share and you need programmers to get on board. But how do you differentiate yourself from the dozens of other options in the market? How do you hold the attention of the ever elusive dev?

Fear not. We’ve compiled a ranking of the top 5 things software developers consider when evaluating and selecting cloud services. Here are the some of the most important areas you should focus on in your next marketing campaign.
#5 – Performance Improvements for Users
Nothing will frustrate users more than slow or buggy software. Competition is fierce in today’s software market and there are plenty of choices out there for consumers. All it takes is one bad experience for a user to drop one product and pick up another. Switching is easy.

For these reasons, developers are always concerned about performance in the software they create. If you can show developer that you will make their job easier by providing better performance and UX to their end users then you’ll have won yourself a loyal customer.

#4 – Ease of Development, Deployment and Maintenance
Developers can be a strategically lazy group. And I don’t meant that in a bad way, actually, that’s what makes devs so good at what they do.

Developers hate inefficiencies and redundant tasks. Give a software developer or engineer a problem and they will find the simplest and quickest way to achieve the desired result. They don’t like to make things more complicated than they have to be.

Remember this when you’re putting together your next marketing campaign. The whole reason that developers are coming to is so you can make their lives and jobs easier. Let them know how you will help.

#3 – Cost Savings
This one is pretty self explanatory. I mean who doesn’t want to save a few bucks when they can? Just be weary of how you present the cost-savings perk of your product or service – you don’t want to be equated to being “cheap”.

Quality is very important. Value for money is what developers are after.

#2 – Reliability and Uptime
In a (very) close second, reliability and uptime was chosen by 54.5 percent of developers that completed our survey as one of the most important considerations when it comes to cloud services.

Developers have stakeholders that rely on the applications and technology they are creating, and in turn, developers rely on their cloud service providers (you) to deliver robust and reliable solutions that work when and where they need them.

There aren’t many things that will sully a developer’s opinion of you quicker than an unreliable service with bouts of downtime and frustration.

Communicating the reliability and uptime capabilities of your services should be a focal point of the value proposition you present to customers. Prove to developers why they should put their trust in you (and not your competitor).

#1 – Security
Given all the high-profile data breaches and hacks in recent years (Sony Pictures, Target, Ashley Madison just to name a few) it’s no surprise that security is top of mind for developers.

Over 55 percent of the developers we surveyed said that security is one of the most important considerations when it comes to using cloud services.

Highlighting the security capabilities of your cloud service is an important part of winning the hearts and minds of potential customers. Just be sure that your product has the security chops to stand up to the claims you make in your marketing campaigns. Developers have a good nose for anything “fishy” and they won’t hesitate to (publicly) call you on it.

Now get out there and sell some cloud services to devs! And don’t forget to let us know how Developer Media can help!

Notes on Methodology
All statistics not otherwise noted are from proprietary Developer Media surveys, based on a sample of over 23 million unique monthly developers who visit our sites. Our June/July Cloud Developer Survey had 428 respondents. Projecting this sample against a population of approximately 4 million unique monthly visitors, we estimate about a 4.74% margin of error at a 95% confidence level. In this report, we generally highlight trends well above these possible margins of error.