There are now more than a combined 3 million apps available for download across Google Play and the Apple App Store, the world’s two leading mobile app marketplaces. Add in all of the many thousands of business-focused (B2B) mobile applications sold direct or through alternative channels, as well as the countless proprietary applications developed for in-house use (B2E), and it’s clear that mobile tech continues to be an important focus for many software developers in 2015.

To garner greater insight into how developers within our own audience are interacting with and affected by this ever-growing mobile landscape, we recently surveyed over 500 CodeProject members about a variety of mobile trends, platforms and technologies. Below are some of the highlights from our research.

How many developers are writing mobile apps?

43 percent of developers are currently developing mobile applications, according to the responses collected in our June 2015 survey of over 500 developers and CodeProject members.

Who is the target audience for mobile applications?

We were also curious to see which type of audiences are being targeted by developers writing mobile applications. The table below defines the five distinct audience types outlined in our survey and the percentage of respondents currently targeting each:

When compared to results from the same survey conducted a year earlier in April 2014, we find that:

The chart below compares the results from both our 2014 and 2015 surveys. 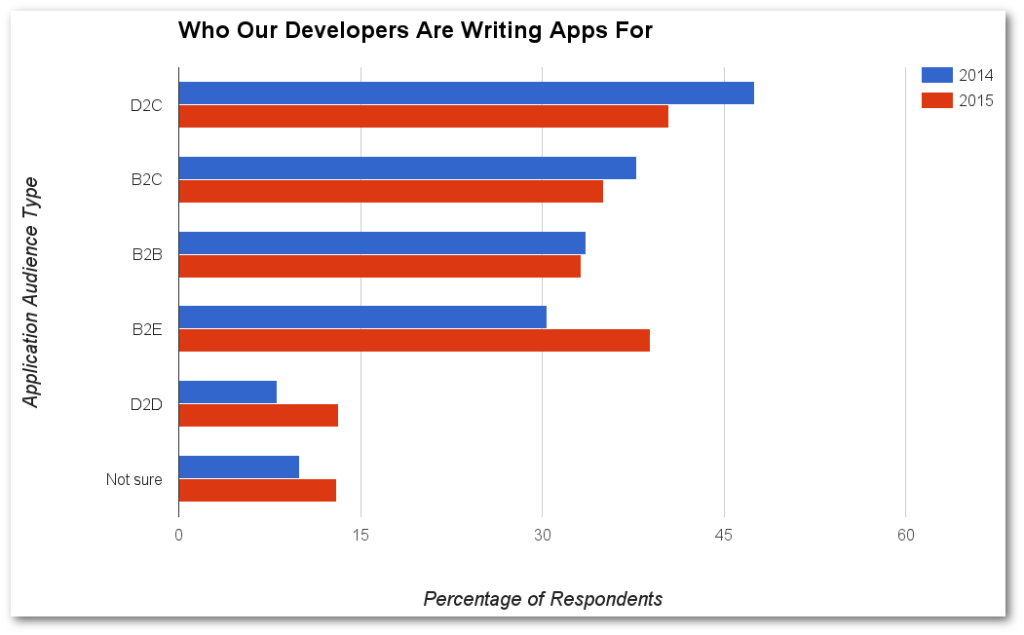 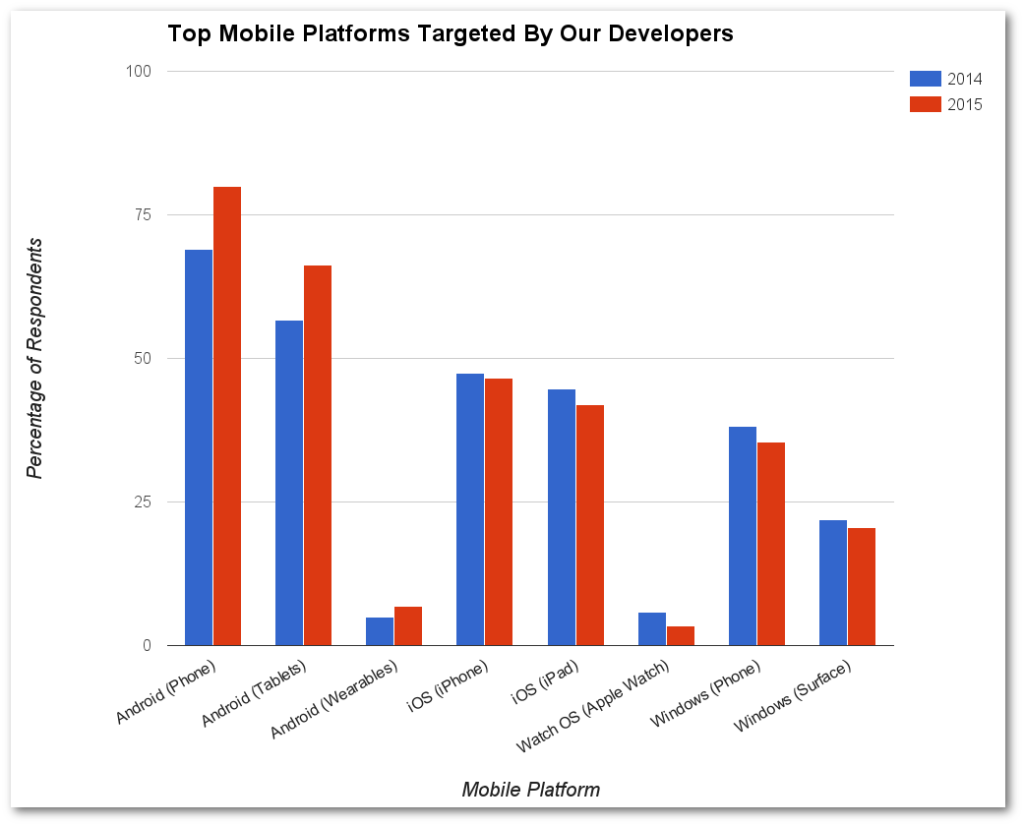 Compared to results of the same survey conducted in 2014, it’s interesting to note that the Android phone has grown in popularity among our mobile devs from about 69 percent usage to 80 percent, and the Android tablet has grown from 57 percent to 66 percent.

While the drops are not statistically significant, our data suggests that there is a smaller percentage of developers targeting iOS (both iPhone and iPad), watchOS, and the Windows platforms (phones and tablets) respectively in 2015 compared to the year prior.

Is there money in mobile?

Or at least that’s the resounding answer we received when posing that question to our survey sample. About 20 percent of survey respondents felt that writing mobile apps would not bring them financial success, 26 percent of respondents took the “glass-half-full” perspective and said writing mobile apps would bring them monetary success, while the majority (56 percent) remain on the fence with “maybe.” 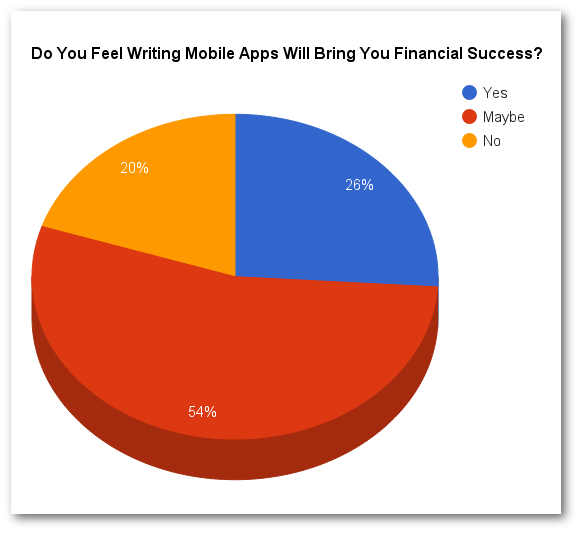 These results are in line with findings published by Vision Mobile in their July 2015 “State of the Developer Nation” report, which states that more than half of mobile developers (51 percent) globally are not making a sustainable income (defined as less than $500 a month) from their mobile development projects.

While the financial benefits of mobile remain unclear for many developers we surveyed, it is clear that a large portion (43 percent) of the developers in our audience are engaged in developing mobile applications and many are doing so on multiple platforms targeted at different audience segments.

Over the past 12 months we have seen less focus on consumer-facing apps (although they still remain the most targeted audience by devs) and fairly significant increase in the number of applications being written by businesses for internal use and use by other developers.

iOS and Windows mobile platforms continue to be popular targets among the developers we surveyed, however, Android wears the crown in this arena and holds onto its title at the most popular mobile platform among mobile developers. In fact, the number of developers targeting Android platforms has jumped over ten percentage points the last year alone.

All statistics not otherwise noted are from proprietary Developer Media surveys, based on a sample of over 23 million unique monthly developers who visit our sites. Our April 2014 Mobile Dev Survey and April 2015 Mobile Dev Survey had 751 and 539 respondents, respectively. Projecting those samples against a population of approximately 4 million unique monthly visitors, we estimate about a 3.58% margin of error at a 95% confidence level and a 4.21% margin of error for a 95% confidence level.