As we often tell our clients, the computing landscape is evolving, and rapid change has become something developers have had to accept (along with the rest of us).

Often we’re asked why there are so many Windows developers in our audience. It’s a simple answer: it’s because 90% of computers in the world run Windows. Yes, Windows. It’s not just our audience — it’s the reality of the desktop PC world. 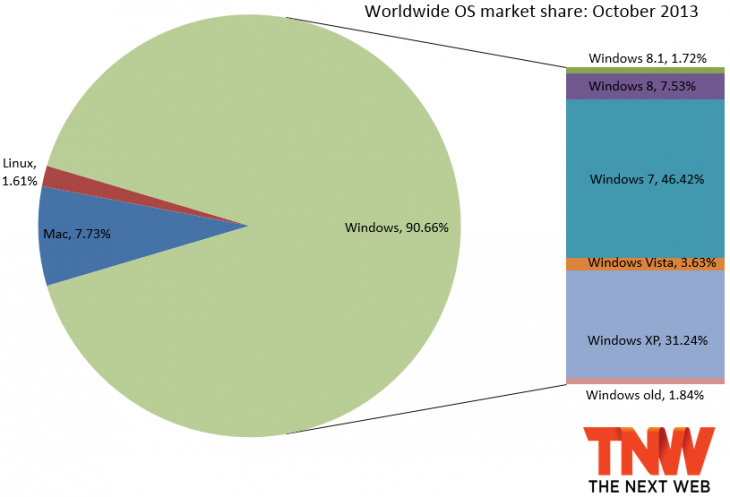 image from The Next Web. The article talks about how Windows 8.1 adoption is ahead of Windows 8 adoption, and so forth – good summary for those tracking platform usage. Note the frightening continued use of Windows XP, which is nearing “end of life” and thus end of Microsoft support.

Now, by no means do we mean to imply that desktop computers are the only way people are “computing” now. The computer world has changed. Ten years ago, when we talked about software development, we meant desktop and server. That was about it. Now, of course, in both the consumer and the business space, people use more than desktops: tablets, smartphones, and so forth.

There are any number of excellent surveys showing this fact, but one of the more recent ones, from emarketer.com, shows how consumers still access the Internet — which is the primary way most of us now use our devices and PCs.

image from emarketer.com. The article also includes some interesting stats about exactly what folks are doing when they’re accessing the Internet — email, shopping, etc.

Surprisingly with the rapid increase of mobile devices, desktop access is still around 80%. But the purpose of this piece is not to suggest where growth will come from (as Internet usage increases worldwide, mobile phones are usually the means by which emerging markets “come online.”).

Instead, the key point is this: desktop software use and Internet access remains strong, and as long as that is the case, the number of developers who include Windows development in their arsenal will remain strong.

The trend we see, as I’ve reported many times, is that developers are no longer developing for just Windows. Instead, they develop using many tools, many languages and many platforms. The traditional Windows developer remains the most common type found “in the wild,” but the nature of that developer has changed.