Software development languages and SDKs are tools of the trade — the modern-day equivalent of the hammer, saw, and screwdriver. Just like carpenters’ tools, the programming languages used today are specialized, offering specific advantages to developers for certain applications or devices. Within this context, SlashData ranks programming languages according to popularity among the developers surveyed. See Table 1 below: 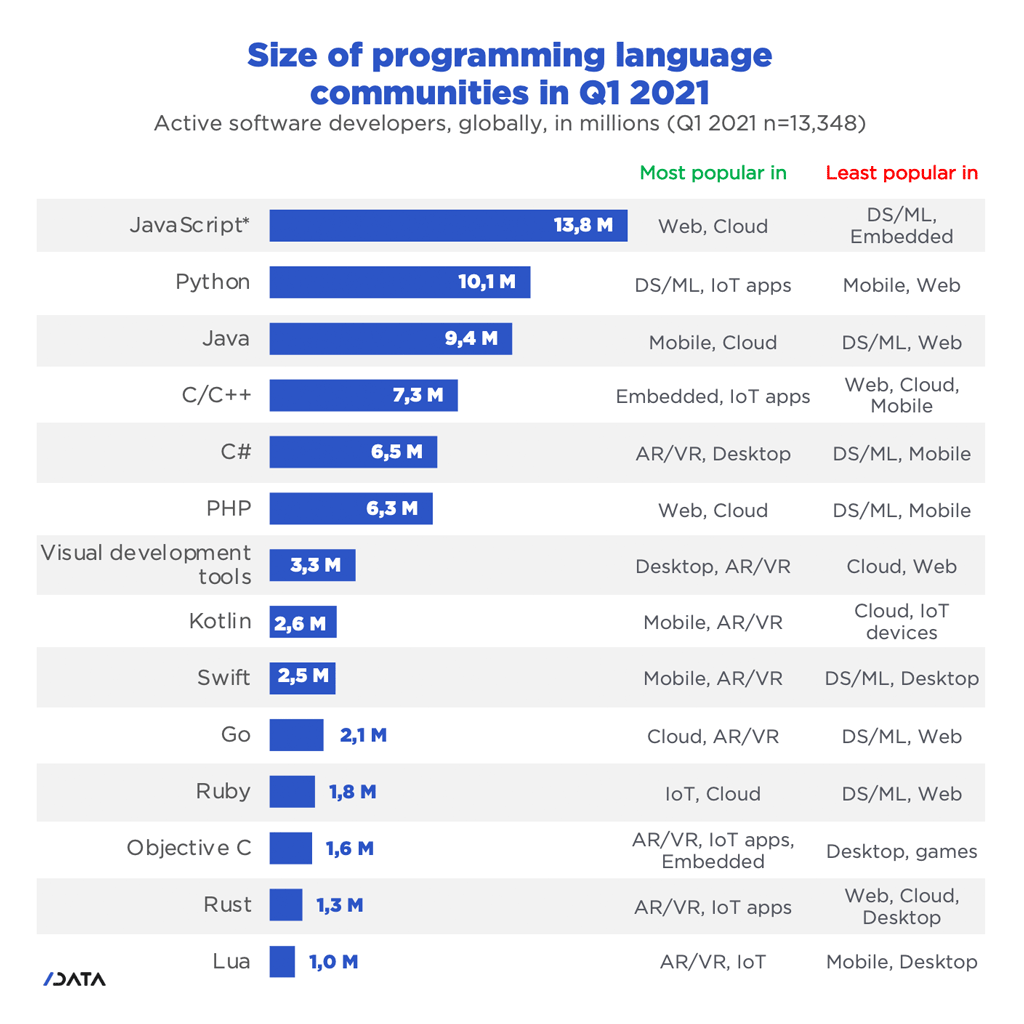 JavaScript is the Leader

Running down the list of contenders, C/C++ and C# are still favored for embedded and IoT applications, while PHP remains a solid preference for web applications.

Kotlin, named for a Russian island in the Baltic Sea (where most of the JetBrains development team lives), is the fastest growing language (thanks to Google’s decision to make it its preferred language for Android development over Java). Survey results indicate Kotlin has actually surpassed Swift in preference even though Swift is the preferred default language for all Apple platforms.

Go, Ruby, Objective C, Rust and Lua also made the survey, with each showing respectable growth. One exception is Objective C, whose use is slowing due to the preference for Swift over Objective C in the Apple ecosystem. Rust and Lua are the fastest-growing languages in the past year. Developers like the fast learning curve of Lua and memory safety of Rust.

What Does This Mean for Advertisers?

Marketing to developers means offering them applications and information they can use in their work. Development language preferences are driven by demand for applications or platform- specific advantages — so advertisers should connect their offerings with these advantages. While developers have a choice of programming languages for a specific project or application, they will choose the best tool to fit their need in terms of efficiency and marketability. For advertisers, this offers insight into how to position tools within the tool ecosystem that their specific developer market operates in.

Currently, the most popular programming language is JavaScript, with wide use in web and cloud applications. Python has become developers’ second most preferred language for its use in DS/ML and IoT applications, followed by Java. And Kotlin is growing fast as the preferred development language for Android development. Keep an eye out for fast-growing Lua and Rust communities going forward.