Upsurge of Developers Working in the Internet of Things in 2015

The term “Internet of Things” (IoT) was first coined in 1999 and the various technologies and computing concepts that make it up — machine-to-machine communications/M2M, embedded devices, smart/intelligent systems, etc. — have existed in some form or another for even longer, but it wasn’t until more recently that IoT really started to gain mainstream momentum (just look at the Google Trends report below). 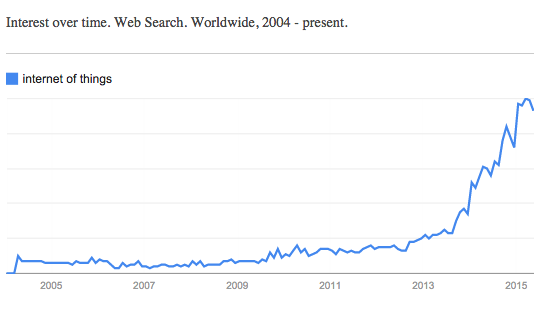 2014 marked a watershed year for the now firmly established technology megatrend and perhaps nowhere is that more apparent than in the world (and business) of software development. Last year saw the inaugural Internet of Things Developers Conference make its debut, the Application Developers Alliance released its Internet of Things ‘Developer’s Mandate’, and here at Developer Media we saw a big push from clients like Cisco, Samsung, Microsoft, Intel and others for recruitment of developers to their respective IoT programs and initiatives.

But have these efforts paid off in getting more developers working on IoT projects? Our data certainly seems to suggest so…

Almost a full third of programmers developing for Connected Devices

Between May and June 2014 we surveyed 390 CodeProject members to learn more about what developers are exploring in relation to the Internet of Things. At the time, just 23 percent of those surveyed said ‘Yes’ when asked if they develop for connected devices.

When we posed that same question in an April 2015 survey of over 450 CodeProject members, 31 percent of respondents said they develop for connected devices.

That’s a 34 percent growth in less than a year in terms of the number of programmers developing software for connected devices!

Which segments are developers working in?

The Internet of Things is made up of a wide range of different product categories, markets and technologies and as part of our research into IoT developer trends we’ve begun to track which types of connected devices developers are working with most and which segments are seeing growth each year.

In both our 2014 and 2015 surveys, Smartphones, Tablets and the PC/Laptop/Netbook segments were the top three connected device types being targeted by the developers we spoke to. This can be attributed to the fact that these types of devices are the most ubiquitous and serve as the main “access points” for humans to interact with other connected devices.

Beyond these, we find that the most popular segments of connected devices include Embedded or M2M devices, Wearables, Connected Cars, and Smart Homes. 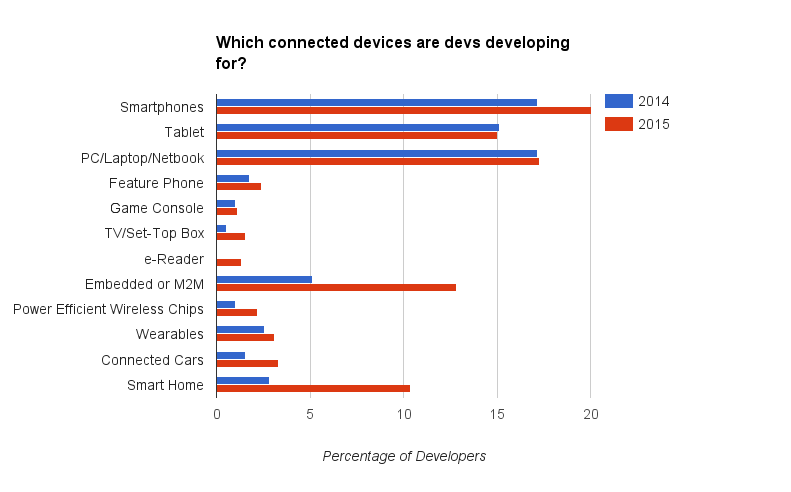 The Smart Home segment saw the most growth of any connected device segment when comparing the results of our two surveys. In 2014, 2.82 percent of developers surveyed said they develop for the Smart Home segment, and now that number has climbed to more than 10 percent. Interesting although perhaps not surprising when you consider Google’s $3.2 billion acquisition of home automation company Nest last year.

Embedded and M2M devices saw the next biggest spike in terms of the number of programmers developing for them jumping from 5.13 percent to 12.8 percent, followed by Connected Cars and then Wearables.

Which segments will see the most growth in the next 12 months?

Excluding the Smartphones, Tablets and the PC/Laptop/Netbook categories, the four segments outlined in the table above will continue to see some of the highest growth in the next year. 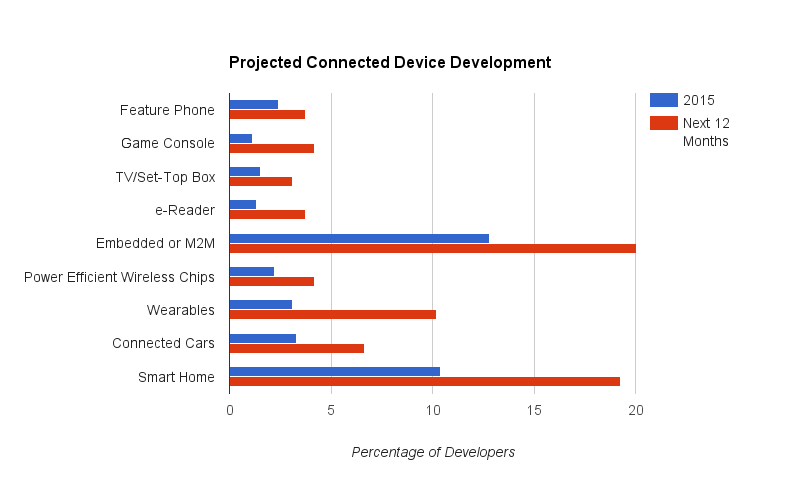 Here’s what we expect to see over the next 12 months:

Power efficient wireless chips, TV/set-top boxes, and game consoles are other segments poised for uptake in the coming months too.

We hope that this information has provided you some insight into which connected device segments are hot with developers right now and the kind of growth you can expect to see in each so you can properly prepare and coordinate your marketing efforts and budgets. And if you’re a developer who’s reading this, then now is the time to build your skills and experience in these different areas if you want to cash in on the Internet of Things megatrend.

What Internet of Things-related trends are you seeing yourself? How is your team preparing for its growth and importance among developers? Leave a comment and let us know.

All statistics not otherwise noted are from proprietary Developer Media surveys, based on a sample of over 23 million unique monthly developers who visit our sites. Our May/June 2014 and April 2015 surveys had 390 and 450 respondents, respectively. Projecting those samples against a population of approximately 4 million unique monthly visitors, we estimate about a 4.96% margin of error at a 95% confidence level and a 4.62% margin of error for a 95% confidence level.