Dev Tidbits #001: How much caffeine do developers consume?

This is the first post in our new “Dev Tidbits” series, which looks at interesting, quirky and fun facts about developers in their professional and personal lives.

Between writing code and scripts, testing, fixing bugs, keeping projects on schedule, late-night deployments, learning new languages and frameworks, fixing more bugs, refactoring and waiting for the compiler (or any of the other tasks that chew up a programmer’s day) there are a lot of demands on a software developer’s time. How do devs stay alert and on task throughout a long day (or night) of coding?

The answer is pretty simple: CAFFEINE.

In a recent informal poll, we asked 1,117 CodeProject members to tell us how much caffeine they consume each day and here’s what we found. 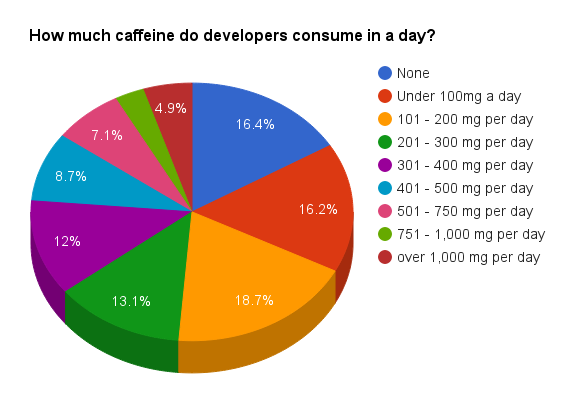 Apparently developers really like their caffeine! Sure, there’s a segment of developers (about 16 percent of  those surveyed) that won’t ever touch a drop of caffeine-laden beverages, but the average developer consumes the equivalent of anywhere from one to five cups of coffee a day. There’s even a small, yet dedicated group of  enthusiasts that drink in excess of 10 espressos a day!

So, next time you’re planning a conference or event with developers be sure to stockpile plenty of coffee, tea, soda, energy drinks, and maybe even some liquid caffeine for good measure.

It will come in handy. I promise.

Editorial note: For the purposes of this poll we defined an 8oz brewed coffee or a 2oz espresso as having about 100mg of caffeine, a cup of Tea about 50mg of caffeine, and a can of Coke as 35mg of caffeine. More caffeine measurements can be found here and here.