How to engage with the academic developer community … or even should you?

I’ve talked with several people lately who have asked about how they might best work with student developers. The short version of the story: it’s expensive and somewhat of a luxury, especially for a smaller company.

How students interact with developer resources

To provide some context, here’s my perspective on how students interact with dev resources.

First: students work on projects their instructors want them to work on. There are outliers – the exceptions – who consume everything they can find, who build their own apps, who are entrepreneurial. But they’re the exceptions. Most students are busy being college students, and they mostly use what their instructors give them. They work from the syllabus and individual assignments, and look for answers to questions on the Internet only when absolutely necessary or convenient. (Note that this kind of drive-by visitor is the exact kind we prefer not to have at Developer Media, and that’s why we emphasize quality content.)

Think of the college students you know. How many have the time or inclination to do extracurricular things, especially those that involve a lot of work? Few. And particularly with Micro Focus – where they’re trying to convince college students to (1) spend time away from video games and work on the computer more, (2) build something that will take a significant amount of time away from their studies, and (3) build that thing in a language they all consider beyond dead. I mean, even C and C# and Java seem like old-school languages to these students.

High-Touch Efforts Are Effective but Expensive

So I’ve seen many companies have success with evangelizing their platforms and technologies through sustained, high-touch effort to higher education. They might be providing tools and help to professors. They might be creating curricula that professors might be interested in using. Whatever their tactic is, they’ve spent time with faculty to find out how they can help faculty solve their specific problems. And these companies know that spending time helping faculty is their secret weapon in influencing higher education students. Sure, you can pass out beer cozies at the student union, but that doesn’t mean students are going to be influenced by you in the future.

The most obvious example, and it’s not specifically in the developer space, is Apple. In the 1980s Apple offered great discounts to schools of all sizes, and many people of my generation remember the Apple II-based computer labs fondly. As the decade wore on, Apple wanted to encourage Mac adoption, and not only continued and expanded its academic discount program, but partnered with an underground cartoonist to create posters and booklets distributed at colleges. (Today we might call this an influencer or spokesperson model.) Students – who enjoyed reading the “underground” press like the local free tabloids and campus papers, would be familiar with the “Life in Hell” cartoon strip and its creator, Matt Groening. Now  he’s famous for creating the Simpsons, but back then he was known for “Life in Hell.” I proudly displayed a couple of these posters in my dorms and apartments too. 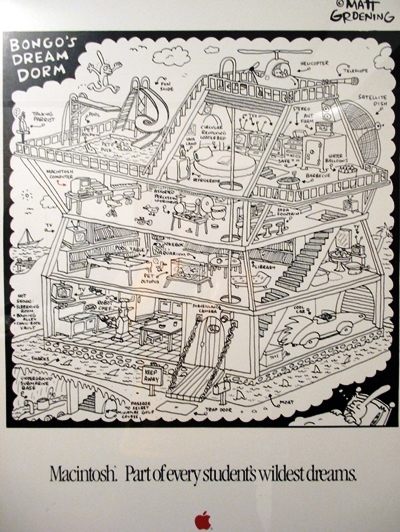 (Original image source here (I didn’t dig my poster out of the basement); also see this article, where the story goes that the last poster was created in return for a LaserWriter ($7000).) Groening also illustrated an Apple computer-promoting booklet distributed in campus bookstores.

I digress only a bit to show that Apple has done a few super smart things: they started early with academic discounting – which continues to this day and cemented its dominance in higher ed. And they were not shy to build campus awareness with college-culture-literate promotion. Today’s college-literate promotion would include social media outreach, of course. Note that these promotions involved individual efforts with specific universities.

Another good example is Microsoft’s Imagine Cup. You can find out more about it here (http://www.imaginecup.com), but it’s a worldwide promotion that rewards students and student teams who create cool technologies and complete certain challenges. Microsoft has not done everything right in the academic sector, but this is smart.

That said, the difference between what Apple and Microsoft do and what the average small to medium developer tools/services company can do is simple: they have a lot of money and a lot of people to throw at this long-term strategy. As I mentioned earlier, this is a time- and money-intensive effort.

But there are a few things your “mere mortal” company can do.

Those are just a few ideas to get you started — what’s your perspective?